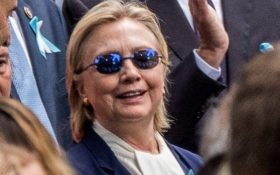 Former Secretary of State Hillary Clinton is back — and she’s preparing to cash in on a new book.

In order to build hype around the release of her 2016 presidential election tell-all, Clinton released a bizarre excerpt about her interaction with then-Republican presidential candidate Donald Trump during an Oct 2016 debate.

Clinton claims Trump’s demeanor onstage made her so uncomfortable “my skin crawled.” She also claimed in her upcoming book that Trump was so intimidating she could barely resist shouting out that he was a “creep” and “get away from me!”

The twice-failed Democratic presidential nominee recounts her struggle to keep composed during that pivotal Oct. 9 faceoff in St. Louis less than a month before the election.

During the town-hall style debate, the 6-foot-3 Trump towered over Clinton, who’s closer to 5-foot-5, and she claimed it caused  her to nearly descend into hysterics.

“This is not OK, I thought. It was the second presidential debate, and Donald Trump was looming behind me,” Clinton says in her audio narration of “What Happened,” set for release Sept. 12. “… no matter where I walked, he followed me closely, staring at me, making faces. It was incredibly uncomfortable he was literally breathing down my neck. My skin crawled.”

In other words, Clinton becomes so unhinged around people she dislikes she wants to scream — and is barely able to engage in debate.

Clinton says, “It was one of those moments where you wish you could hit pause and ask everyone watching, ‘Well, what would you do?’ Do you stay calm, keep smiling and carry on as if he weren’t repeatedly invading your space? Or do you turn, look him in the eye, and say loudly and clearly, ‘Back up you creep, get away from me!'”

Does that sound like the demenor of a person ready to lead the most powerful country in the world against madmen like Kim Jong Un?

Excerpts of Clinton reading from the book aired Wednesday on MSNBC’s “Morning Joe.”