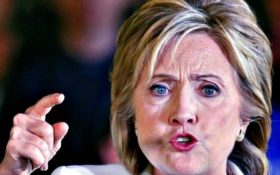 Former Secretary of State Hillary Clinton wanted to be the first female president — and she doesn’t want to hear about President Donald Trump’s daughter potentially taking the honor for herself.

When asked why she thought that, Hillary claimed that Americans “don’t want any more inexperienced Trumps in the White House.”

Jinek brought up that the world has “learned after these elections that things that we don’t except to happen sometimes do happen.”

“Well, that’s true, but you know, fool me once shame on you, fool me twice, shame on me,” Hillary said. “And I think the American people have seen for themselves what happens when a reality TV candidate wins… and I really believe there’s an enormous amount of pent-up energy to take the country back away from the Trump administration.”

Watch the video of Hillary being triggered by the thought of Ivanka Trump becoming president below.

Then, let us know what you think of Hillary’s “fool me once” statement. If you had to do it all over again, would you vote Trump or Hillary?

If you had to do it again, would you vote Donald Trump or Hillary Clinton?