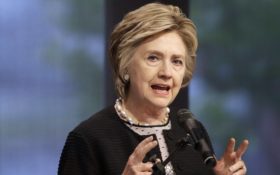 Hillary Clinton claims she was absolutely shocked and horrified to learn that longtime friend and backer Harvey Weinstein allegedly harassed and assaulted women.

But she’s not horrified enough to return the money he gave to the family charity!

The Clinton Foundation said this week that it just can’t return the cash the disgraced Hollywood mogul gave to the organization.

They can’t… because they’ve already spent it!

“Suggesting (the Foundation) return funds from our 330,000+ donors ignores the fact that donations have been used to help people across the world,” spokesman Craig Minassian wrote on Twitter.

No one is suggesting the foundation return fund from its “330,000+ donors.”

Just funds from ONE donor.

This alleged serial abuser has donated somewhere between $100,000 and $250,000 to the Clinton Foundation, which certainly might sound like a lot of money.

But given that the foundation rakes in roughly $300 million per year, Weinstein’s donation represents just a few hours’ revenue for the group.

At the very least, they could have a big ceremony and announce that it’s being used to help women in nations where they face repression and abuse. They won’t, because that would put the Clinton Foundation in a very uncomfortable spot, given that those nations are also top donors!

The government of Brunei, one of the most brutal and repressive regimes in the world, has given between $1 million and $5 million. The Saudis have given as much as $25 million.

As a result, the charity has pretended to be indignant over calls to return the Weinstein cash to distract from their much bigger problems.

“We are a charity. Donations, these included, have been spent fighting childhood obesity and HIV/AIDS, combatting climate change, and empowering girls and women, and we have no plans to return them,” a Clinton Foundation spokesperson told Fox News.

Hillary Clinton herself has certainly not been much better on the issue.

As the allegations became public, politicians who have received Weinstein’s dirty money lined up to distance themselves from him. They not only announced they would be donating those dollars to charity, but they were quite specific about it.

Senator Cory Booker (D-New Jersey) said the $7,800 he was given by Weinstein would go to the New Jersey Coalition Against Sexual Assault. One state over, Senator Kirsten Gillibrand (D-New York) vowed the $11,800 she got from Weinstein would be sent to RAINN, a group for victims of sexual violence.

Clinton went into hiding for nearly a week.

It took her FIVE DAYS to issue a statement blasting her longtime friend, supporter and frequent donor after the allegations came out.

Then, she issued a bizarre statement on her own Weinstein money.

“What other people are saying, what my former colleagues are saying, is they’re going to donate it to charity, and of course I will do that,” she told CNN. “I give 10% of my income to charity every year, this will be part of that. There’s no doubt about it.”

That statement, however, appears to be full of doubt.

Clinton said the Weinstein money would be “part of” her annual 10 percent donation to charities.

But if her annual donation to charities is 10 percent and that number isn’t changing, then she’s not really giving a single penny of that dirty money back.

Looks like the Clinton Foundation is just following the example of its leader.