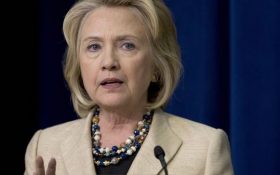 Twice-failed Democratic presidential candidate Hillary Clinton has been having a rough time on her recent trip to the United Kingdom.

As part of her book tour, Hillary is touring through Wales and England to promote her new tell-all memoir from the 2016 presidential election, “What Happened” — and things have not gone well.

Monday, the former secretary of state fell down a flight of stairs and hurt herself. She either twisted her ankle or broke her toe, reports vary.

Around the same time, humiliating footage began circulating social media from Hillary’s arrival at Swansea University. She was invited to receive an honorary degree, and was greeted by a crowd as she arrived. Many assumed the crowd would cheer the liberal leader.

But that’s not what the people had gathered for.

As the doors opened on her black van, the crowd began loudly booing and yelling, “Facist!” — and it forced Hillary to beat a hasty retreat inside.

There’s really no need to buy the “What Happened” book, because what happened to Hillary is clear in the video.

So what happened? American voters woke up.

You can see the embarrassing footage here —