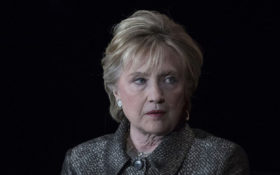 Former President Bill Clinton and failed presidential candidate Hillary Clinton are having a lot of restless nights — because no one is taking their concerns seriously.

The Clintons have an urgent wake-up call for Democrats: Donald Trump could win in 2020.

And one reason for it?

The Democrats love identity politics so much that they just might destroy ALL of their own best candidates!

Hillary Clinton appeared to scold the left when speaking at an event in Washington last week.

“Rather than immediately saying ‘I’m for this person’ or ‘against this person’ or looking for every way to possibly criticize people because they have a record,” voters should look at who can win both the popular vote and electoral college, Clinton said, according to The Atlantic.

While the Clintons haven’t endorsed anyone, they could be speaking about former Vice President Joe Biden.

Biden led in polls of Democratic voters even before he announced his candidacy for 2020. Then, when he formally said he’s running, his numbers skyrocketed. He’s doubling and even tripling his rivals.

Yet despite his surge in popularity, he’s being hit with “Me Too” allegations for his creepy tendency to violate the personal space of women around him, and leftist groups are attacking him for being too centrist, too mainstream and occasionally saying nice things about Republicans (unforgivable!).

In Clinton’s words, they’re “looking for every way to possibly criticize” him.

If Biden – who was a popular vice president, especially among Democrats – can’t win over the left, the Clintons seem worried that no one will pass the identity politics purity test.

The Clintons didn’t mention Biden by name, but he fits the bill. But they also seemed worried about a big picture tendency among the left to tear down its own best hopes.

Just weeks ago, South Bend, Ind., Mayor Pete Buttigieg was the toast of the left. Now the left is ripping HIM apart too… in part for the “crime” of being white and male!

No doubt, the Clintons touched a nerve when they delivered this all-too-honest assessment at a special event in Washington last week where people PAID to hear them speak (imagine that).

Those paid worshippers were no doubt hoping to reminisce about happier times and hear pontifications from deep inside the liberal echo chamber.

Instead, they got hit with a cold dose of reality – one that’s backed by the real-world evidence building up all around us right now, which suggests that even the perfect Democratic candidate may not be able to beat Trump.

His poll numbers are creeping up. In the latest Rasmussen polls, his job approval numbers are consistently topping his disapproval.

And all the signs an incumbent loves are there.

Generally, an incumbent in a growing economy with high employment is tough to beat – and Trump may prove the toughest to beat of all, which has his reelection team confident.

Trump campaign manager Brad Parscale said that they’re not just going to defend the states they already won, including the key “Rust Belt” of Pennsylvania, Ohio, Michigan and Wisconsin.

They’re going to expand the map – and in an interview with CBS News, he ticked off a list of targets that no doubt has Democrats nervous: New Hampshire, Minnesota, New Mexico, and Colorado.

No wonder the left is nervous!