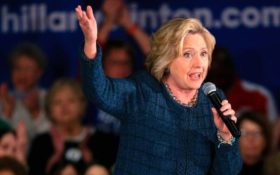 There are plenty of theories as to why failed Democratic nominee Hillary Clinton lost the 2016 presidential election: Her career of corruption, her dishonesty, her husband’s sexual escapades, the suspicion of blood on her hands, and her tumultuous relationship with the truth are justl a few that come to mind.

But Hillary doesn’t want to hear that.

Instead, she has her own theory, which she revealed at the eighth annual Women in the World Summit Thursday.

And it’s proof she is in complete denial.

When discussing the election results and the reasoning behind her embarrassing loss, Hillary mentioned James Comey, the FBI and WikiLeaks as contributors.

But the main reason she lost? Men, who can’t help but being sexist.

“Certainly misogyny played a role, that just has to be admitted,” Hillary said.

Is there no low this woman won’t sink to?

This is a disgusting example of identity politics at its worst.

At a time when our nation needs unity above all else, Hillary decides to label half the the nation as sexist… instead of facing the truth that the public simply didn’t want her in the oval office.

Not only is she ignoring the serious issues the citizens had with her potential presidency, Hillary is once again ignoring facts!

She received less votes from white women than Donald Trump, for example — 43% to his 53%.

And women turned out less for Hillary than they did for former President Barack Obama in both his 2008 and 2012 elections.

If that doesn’t convince her that men weren’t the cause behind her loss, a New York University study might.

The University, at which she once spoke during the graduation commencement, did a study in which the presidential debates were reenacted, only Hillary and Trump’s genders were switched.

A male actor played the role of Hillary Clinton while a female actress played the role of Donald Trump, using the same rhetoric and body language as the real candidates to test the audience response to the opponents if they were the opposite sex.

The Horn News reported, “Viewers quickly realize that a male Clinton isn’t more appealing. Instead, the flaws they were so willing to overlook — her over-rehearsed lines, the forced mannerisms, and that unsettling smile — become magnified. Salvatore said that one audience member told him the male Clinton was “punchable.”

Hillary continues to meltdown over her loss, and is tossing blame everywhere.

Whether its Russia, the CIA, Wikileaks and now men for her election loss, or an Internet video for the death of four American heroes in Benghazi, Hillary has an excuse for everything.

There’s only one person Hillary can blame: Herself.