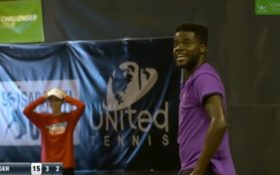 An outdoor professional tennis match in Florida came to a brief halt amid sounds of loud sex.

Frances Tiafoe was about to serve Mitchell Krueger during their Tuesday night match in the Sarasota Open when he paused and flashed a smile of disbelief over the sound of a woman moaning in pleasure. Broadcaster Mike Cation initially described the sounds as coming from someone playing a pornographic video in the stands, but later said they were coming from an apartment nearby.

Both players had fun with the situation while the crowd laughed. Kreuger hit a ball sharply in the direction of the sounds, and Tiafoe screamed, “It can’t be that good!”

Cation later saluted the responsible couple on Twitter, writing “Sounds like you guys had a good time!”