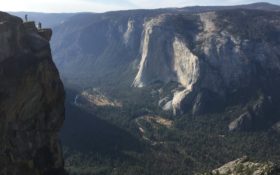 Officials say a woman hiking in Yosemite National Park in California was killed after being struck by falling rock and ice on a dangerous trail that was closed to the public.

They say the trail is a popular path from Yosemite Valley to the top of Vernal Fall but is closed due to icy and hazardous conditions.

Authorities say the trail closure is clearly marked and there is a gate on the trail reminding visitors of the closure.

They say Wang ignored the signs and went around the gate.

They say no other information will be released until the investigation is completed.