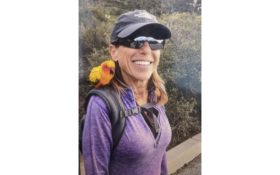 A woman found Monday after going missing from a remote campground in California’s White Mountains said she got lost when she was chased by a man with a knife, according to her family.

A sheriff’s statement described Powell, 60, as “resilient and strong but exhausted.”

A photo from the hospital shows a smiling Powell in bed surrounded by grinning family members.

Her son, Greg Powell, said she was dehydrated but managed to survive by eating cactus.

Greg Powell told ABC News that his mother said she left the campsite on Friday to take her dog for a short walk. She said she was chased by a knife-wielding man, her son said.

“He chased her down the hill and she ran away,” he said. “She was too scared to take the normal path because she thought he was following her. That’s why she wasn’t where they expected her to be.”

The sheriff’s office later released another statement saying it is “actively investigating the circumstances surrounding her disappearance. We have no further information at this time.”

Powell, of Huntington Beach, was reported missing by her husband.

Joseph Powell told authorities that after they selected a site in the Grandview Campground, she walked their small dog, Miley, while he repositioned their Jeep.

“This took five minutes or less but when he got back she and Miley were gone without a trace,” daughter Farrah Powell said in a GoFundMe campaign raising money to assist in the search.

Powell’s husband reported he searched for almost an hour and then alerted law enforcement via a satellite device.

The White Mountains lie east of the Sierra Nevada range and northwest of Death Valley National Park. Grandview Campground is at an elevation of 8,600 feet (2,621 meters) near the Ancient Bristlecone Pine Forest, 230 miles (370 kilometers) north of Los Angeles.

It is prized by star gazers for sky vistas far from city lights, according to the Inyo National Forest. The nearest civilization is a 16-mile (25.8-kilometer) drive to the town of Big Pine down in Owens Valley.

A dozen search and rescue teams, a rescue dog association and aircraft from the California Highway Patrol and Naval Air Station Lemoore took part in the search.

The Ancient Bristlecone Pine Forest has trees that are more than 4,000 years old, the oldest in the world.