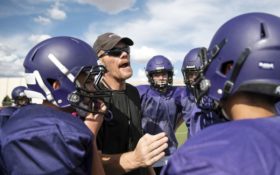 A New Mexico football coach has been fired and faces criminal charges after authorities said a student used a cellphone video to capture the coach on video taking money from a player’s wallet.

According to an arrest warrant, a police officer was contacted by a student’s mother who showed the officer the cellphone video. The video showed Roanhaus walking into the school’s locker area, taking two $20 bills from a black wallet and stuffing the money in his sock, Officer Nathaniel Renteria wrote in the arrest warrant.

The mother told Renteria it wasn’t the first time that players had experienced thefts in the locker room.

Roanhaus, 42, was charged with larceny and non-residential burglary and ordered held on $2,000 bail. Roanhaus did not immediately respond to a telephone message left Wednesday seeking comment.

No attorney was listed for Roanhaus and he has not been assigned a public defender, court records said. A preliminary court hearing on the case was scheduled for Wednesday.

Miyamura High School’s football team has a 1-6 record this season after a 55-14 loss last Friday.