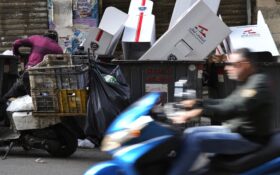 Lebanon’s militant Hezbollah group and its allies lost their parliamentary majority, while more than a dozen independents gained seats, according to final tally released Tuesday. The results signal a significant shift in country gripped by a devastating financial meltdown.

The Hezbollah-led coalition won 61 seats in the 128-member legislature, a drop of 10 members since the last vote was held four years ago. The loss was largely due to setbacks suffered by the group’s political partners, and was not expected to weaken the Iran-backed group’s domination of Lebanese politics. All 13 Hezbollah candidates who ran got elected.

Still, the results were hailed as a breakthrough for groups opposed to Hezbollah and the country’s other mainstream political parties blamed for the collapse, introducing more new independent faces than was expected.

Despite the setback, Hezbollah and its main Shiite ally, the Amal group of Parliament Speaker Nabih Berri, retained the 27 seats allocated to the Shiite sect.

Independents and newcomers, including those from the 2019 protest movement, scooped 14 seats. That was a major achievement considering they went into the vote fragmented and facing intimidation and threats by entrenched mainstream parties.

Their showing sends a strong message to ruling class politicians who have for decades held on to their seats and despite an economic meltdown that has impoverished the country and triggered the biggest wave of emigration since the 1975-90 civil war.

“The results show that the Lebanese mood is against this ruling class and is also against the political alignment with Iran,” said Lebanese Forces official Wissam Raji. “The Lebanese know that the situation has become disastrous and the solution is not in the hands of the ruling class.”

“The solution lies in radical change in the political map of Lebanon at all levels,” Raji said.

The results also portend a sharply polarized parliament, divided between pro and anti-Hezbollah lawmakers who will find it difficult to work together to form a new government and pass laws needed to to enact reforms for a financial recovery in Lebanon.

With two main blocs — Hezbollah and the Lebanese Forces — opposed to each other, analysts said the results could lead to more paralysis at a time when the country desperately needs unity.

The spokesman for the U.N. Secretary-General, Stephane Dujarric, called for the “swift formation of an inclusive government” that can finalize an agreement with the International Monetary Fund and accelerate the implementation of reforms necessary to set Lebanon on the path to recovery.

The U.N. urged “the new Parliament to urgently adopt all legislation necessary to stabilize the economy and improve governance,” Dujarric said.

Sunday’s parliamentary elections were the first since Lebanon’s economic meltdown began in late 2019. The government’s factions have done virtually nothing to address the collapse, leaving Lebanese to fend for themselves as they plunge into poverty, without electricity, medicine, garbage collection or any other semblance of normal life.

The vote is also the first since a deadly explosion at Beirut’s port in August 2020 that killed more than 200, wounded thousands and damaged parts of the capital.