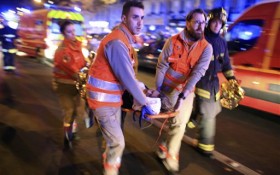 If it weren’t for the fast, capable response of emergency crews, the November 13th Paris attacks could have been even worse.

When extremists began their bloody attack, it triggered the activation of an emergency response plan to treat the injured — and while 302 people were rushed to hospitals, only four died, according to a report published Tuesday in the journal, Lancet.

About one hour after the first suicide bomber blew himself up outside the Stade de France, health officials decided to put their “White Plan” into action, a disaster response plan developed two decades ago that had never been used in such circumstances.

“We did not know how and when this nightmare would end,” doctors wrote in their report. More than 40 medical teams and the fire department were divided between the attack sites and 15 more were kept on standby.

The coordinated attacks across the city claimed 130 victims, but most died instantly and never made it to the hospital.

Most of the victims had gunshot wounds and health workers were so desperate for tourniquets to stop the bleeding that the mobile response teams returned to the hospitals without their belts. To avoid overwhelming emergency rooms in the area closest to the two restaurant shootings, health workers conducted triage at the hospital entrance.

“Never before had such a number of victims been reached and so many wounded been operated on,” they said. “A new threshold had been crossed.”

The doctors said that all necessary operations on the injured were conducted as quickly as possible and that they were never short of supplies. They were helped by the fact that all but one of the patients was less than 40 years old.

Dr. Philippe Juvin, head of the emergency department at Georges Pompidou hospital, said that the youth and good health of most of the patients helped them to survive.

In a strange twist, many doctors and firefighters had taken part in an exercise simulating the organization of emergency responders in an imagined multiple shooting event in Paris on the morning of Nov. 13; when the events began to unfold in reality that evening, some of them thought it was another simulation.

When doctors had time to sift through what had happened that night, they discovered that all of the “upper limb fractures” were so devastating they had to to be treated externally because the broken bones had pierced the skin or there was extensive bone loss.

The doctors warned that if the attacks had happened during the day, the response might have been worse since hospitals would have already been busy. “Unfortunately, the current situation requires us to be prepared to face even more difficult situations in the future,” they said.