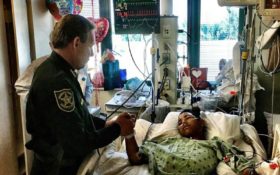 A 15-year-old student who was shot five times during last week’s massacre at Marjory Stoneman Douglas High School is credited with saving the lives of at least 20 other students.

A fundraising site says Anthony Borges was shot in both legs and his back while attempting to close and lock a classroom door last Wednesday. Seventeen people were killed.

Borges’ friend Carlos Rodriguez told ABC’s “Good Morning America” that the two rushed to hide in a nearby classroom when they first heard gunshots. He says no one knew what to do, but that Borges “took the initiative to just save his other classmates.”

Borges’ father Royer Borges says his son called him while lying on the ground after being shot. The father asked him to stay on the line, but at one point, he couldn’t hear the teenager’s voice anymore.

“He told me later ’I had to drop the phone because I thought he was coming in and I wanted to pretend I was asleep so he wouldn’t continue shooting,” Borges told CNN’s Spanish language service.

Anthony Borges and his family are originally from Venezuela. His father says the boy is well-known among local sports clubs for his soccer skills, playing forward and training with Barcelona’s youth academy near Fort Lauderdale.

“One of our own was a hero last week and needs our help,” Donovan wrote on his Twitter account.

Borges’ GoFundMe had raised more than $446,000 as of Tuesday afternoon from nearly 14,000 donations. The legitimacy of the fundraising page was confirmed by the Broward County Sheriff’s Office.

The hospital says it can’t release any details on his condition. It says only that he and three other injured victims from the shooting recovering at Broward Health hospitals are all in “fair condition.” The Sheriff’s Office says that he “has a long road ahead with more surgeries needed.”

“We are all rooting for you,” she said.