Here's who will walk Meghan Markle down the aisle... - The Horn News 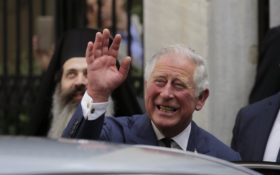 Prince Charles will walk Meghan Markle down the aisle when she marries his son Prince Harry — a gesture of welcome to the American actress as she joins the royal family.

Kensington Palace said Friday that Markle asked the heir to the British throne to offer the supporting elbow Saturday at St. George’s Chapel in Windsor once Markle’s father was unable to attend after falling ill.

Charles “is pleased to be able to welcome Ms. Markle to the Royal Family in this way,” the palace said.

The news came amid the final wedding preparations. Union Jacks have been unfurled, security barriers are up and fans are already moving in to capture the prime viewing positions in Windsor, 25 miles (40 kilometers) west of London.

Buckingham Palace announced that the Duke of Edinburgh will attend the royal wedding, just a few weeks after undergoing a hip replacement operation. The 96-year-old Prince Philip has largely retired from public duties and it had not been clear whether he would be feeling well enough to attend.

The last-minute announcements came after days of speculation. Markle’s mother, Doria Ragland, was the bookies’ favorite to escort the bride, but Prince Charles has a lifetime of experience in appearing at large-scale public events amid intense scrutiny.

Having the father of the groom escort the bride is yet another twist in a royal wedding that is proving to be different from many others. Normally such occasions are carefully choreographed well in advance.

But things began to unravel last week after it emerged that Thomas Markle allegedly staged paparazzi photos in what celebrity website TMZ said was an effort to improve his image and show him to be a loving father preparing for the big day. Markle later said he wouldn’t attend the wedding because he would be recovering from surgery following a heart attack.

Speaking from Windsor, TMZ’s Sean Mandell told the BBC that Thomas Markle was hurt by negative headlines and inaccurate portrayals.

“He was trying to explain his side of things,” Mandell said.