Here's the nominees for the Tony Awards... - The Horn News 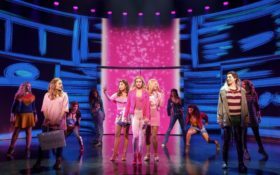 Fey, who adapted the story of her oft-quoted 2004 movie with her composer husband, Jeff Richmond, admitted they awaited Tuesday’s announcement with bated breath. “We’re new to this whole Broadway thing and this whole musical thing so it was hard to tell which way everything could swing,” Richmond said. “We’re delighted.”

A British revival of “Angels in America,” Tony Kushner’s monumental, two-part drama about AIDS, life and love during the 1980s, grabbed 11 nominations — the most for any play this season — 25 years after it first appeared on Broadway.

Denise Gough, who plays Harper Pitt in “Angels in America,” was ’just pleased that the British import landed so gratefully on Broadway. “We’re doing New York’s play! That is a total privilege,” she said. “Wouldn’t that be terrible if we came back and you were all like, what have you done with our play?”

The shimmering, grown-up musical “The Band’s Visit” also earned 11 nods, including Katrina Lenk earning her first Tony nomination. The musical is based on a 2007 Israeli film about an accidental clash of cultures when an Egyptian orchestra gets lost and ends up in the wrong Israeli town.

“I suppose it sounds cheesy if you say it, but it’s really an honor. It’s kind of hard to put into words. It’s a deep joy.” Next up for the actress: a nap. “Then I get to do the show again. I love doing it. I love this cast. I love being here. So the best way to celebrate is just to come back and do it.”

J.K. Rowling’s “Harry Potter” franchise extended its magical touch to Broadway, with the two-part stage play “Harry Potter and the Cursed Child” featuring the bespectacled wizard earning 10 nominations, as did a revival of “My Fair Lady.”

The best new musical category is filled by “The Band’s Visit,” ″Frozen,” ″Mean Girls” and “SpongeBob SquarePants.” Those musicals that failed to make the cut were the Hal Prince revue “Prince of Broadway,” the Jimmy Buffett musical “Escape to Margaritaville” and “Summer,” about disco diva Donna Summer.

Taylor Louderman, a veteran of such musicals as “Bring It On: The Musical” and “Kinky Boots,” earned her first nomination for playing a high school queen bee who is laid low in “Mean Girls.”

“I really haven’t sat back and thought about the young version of me and how she would be freaking out right now,” she said. “I’m from a small town where people don’t really get out and dream big. I just really thought I would never be here.”

She faces competition from Lenk; Lauren Ambrose of “My Fair Lady,” Hailey Kilgore of “Once On This Island,” LaChanze of “Summer: The Donna Summer Musical,” and Jessie Mueller of “Carousel.”

This is Tony-winner Mueller’s fourth nomination but she said it never gets old. “It’s still exciting. It always feels different because every show means something different, and is very personal in its own way. I just keep thinking of all the happy faces I’m going to see tonight when I go to work,” she said.

The two-part “Harry Potter and the Cursed Child,” which picks up 19 years from where Rowling’s last novel left off and portrays Potter and his friends as grown-ups, won nine Olivier Awards in London before coming to the U.S. and bewitching critics and audiences alike. It now will face “The Children,” ″Farinelli and The King,” ″Junk” and “Latin History for Morons” for best new play.

Anthony Boyle won a nomination for best featured actor for his work in “Harry Potter and the Cursed Child.” He played Scorpius Malfoy in London and now on Broadway. He said he’s having a ball with Broadway audiences.

“They’re so vocal, it’s like having an extra cast member onstage,” he said. “You hear audible gasps, and sobs. Broadway audiences are incomparable.”

Best male acting nominations for a play include Denzel Washington, starring in a revival of Eugene O’Neill’s epic “The Iceman Cometh.” The 2010 Tony winner for “Fences” faces off against Andrew Garfield in “Angels in America,” Tom Hollander of “Travesties,” Jamie Parker of “Harry Potter and the Cursed Child” and Mark Rylance in “Farinelli and The King.”

Amy Schumer, who made her Broadway debut in Steve Martin’s comedy “Meteor Shower,” won a nomination for best actress in a play. Others in the category include Glenda Jackson from “Three Tall Women,” Condola Rashad in “Saint Joan” and Lauren Ridloff in “Children of a Lesser God.”

Ridloff, a deaf actress making her Broadway debut in the Broadway revival of Mark Medoff’s 1979 play, paid tribute to Phyllis Frelich, who pioneered the part in 1980 and won a Tony in the same role. In the play, a teacher at a school for the deaf, who becomes romantically involved with a former student, Sarah.

“The messages that come with this story reach to all people that are marginalized — women, people of color, differently abled people,” Ridloff texted on Tuesday. “I just keep my focus on telling Sarah’s story — that is the most important thing to me at the end of the day.”

“Carousel,” ″My Fair Lady” and “Once on This Island” make up the best musical revival category, mostly because they’re only eligible nominees.

One surprise was the relatively few nominations for Disney’s “Frozen” — three, for best original score, best book and best musical. The much-anticipated adaptation of the animated blockbuster got no nominations for its leading ladies — Caissie Levy and Patti Murin— or for traditional Disney strengths like sets and costumes.

While Broadway veterans like Louderman, Mark Rylance and Condola Rashad all received nominations, some Hollywood stars were shut out, including Uma Thurman, Chris Evans and Clive Owen.

Bruce Springsteen, whose solo show mixes songs and stories from his best-selling memoir “Born to Run” and has been banking over $2 million each week he’s onstage, will be granted a special, non-competitive Tony, along with John Leguizamo for “Latin History for Morons.”

Plenty of nominations don’t necessarily lead to actual wins on Tony night. While “Hamilton” was nominated for 16 awards in 2016 and went on to win 11, just last year “Natasha, Pierre & The Great Comet of 1812″ earned a leading 12 nominations but got just two technical awards on the big night.