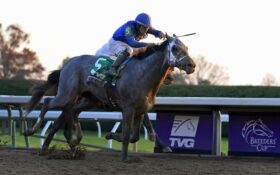 Chris Goodlett has walked around Churchill Downs many times since joining the Kentucky Derby Museum and heard admiring fans say to each other, “Oh, look at that beautiful gray horse.”

Not many of those remarks have come while looking at the winner’s circle after the Derby.

Essential Quality is expected to be the first gray horse to go off as the Kentucky Derby favorite in 25 years. A gray horse hasn’t won the Derby since Giacomo in 2005, and only eight grays have won it since 1930.

According to historians and experts, there are just fewer gray horses compared to more traditional chestnut, bay, brown and black horses, and therefore fewer chances to win the sport’s biggest race.

“That genetic determinant of the gray color is just not at a high enough frequency in the thoroughbred population,” said Dr. James MacLeod, professor of veterinary science at the University of Kentucky’s Gluck Equine Research Center. “There’s no functional connection between the single-gene determinant of gray coat color and the genes associated with elite athletic performance in thoroughbred racehorses.”

Gray does belong in the spectrum of colors for elite racehorses over the past century, especially in recent decades. Silver Charm won the first two legs of the Triple Crown in 1997 before falling short in the Belmont, and Winning Colors in 1988 remains the most recent filly to win the Derby.

Success has just been rare, with 110 grays running in the Derby over the past 90 years and 7.3% winning it. Goodlett can’t say how that compares to horses of other colors, which have won the other 82 most recent incarnations of the race.

Essential Quality could be on the leading edge of the next generation of speedy grays thanks to his sire, Tapit, who has fathered some strong horses so far and expected to produce more. Fellow Derby runner Soup and Sandwich also has Tapit lineage on his mother’s side.

“Tapit is one of the most successful sires in the world right now and has been for a while and is getting some extremely talented mares sent to him, so likely those foals are going to race at higher levels,” MacLeod said. “There’s probably more grays now racing at the top tier on average than a normal year, so we might see an increase in grays at the top tier over the next couple of decades.”

Grays could be even more prominent on the Triple Crown circuit in the coming years had it not been for the death of North American all-time money-earner Arrogate last June at age 7. A 2-year-old filly sired by Arrogate recently sold for $1 million, and Bouyea said some in the industry are eager to buy more of the champion horse’s babies based on pedigree.

While the gray gene that affects a horse’s color is dominant, meaning it only takes a copy from either the sire or dam for the foal to be gray, there’s no link between a horse’s appearance and running ability.

“All that needs to happen is you have to have a couple of really, really fast grays and then they get (bred) and then at least half of their foals are gray, ” Virginia-Maryland College of Veterinary Medicine professor of pathology and genetics Dr. D. Phillip Sponenberg said. “There’s few of them. And it just takes a really, really stellar one to change that, and a stellar one hasn’t come around.”

Essential Quality could be stellar, and his next task is trying to win the Derby as the favorite. Trainer Brad Cox isn’t worried what Essential Quality’s coat looks like, other than he’s draped in red roses Saturday night.

“He can’t change his color,” Cox said. “Tapit’s a world-class sire that is due a Kentucky Derby winner, and I’m hopeful that Essential Quality can be his first. It’s a talking point for some people, not me. It just doesn’t really go into the equation of what we’re trying. It doesn’t limit his ability being gray at all.”

It actually helps NBC announcer Larry Collmus distinguish between horses, especially in a crowded field of 20. Collmus expects to refer to at least Soup and Sandwich as “the gray” because of how light colored he is and knows he and Essential Quality will stand out in the race.

“You get a completely different picture,” he said. “I think people just get a kick out of seeing gray horses because they’re somewhat rare.”