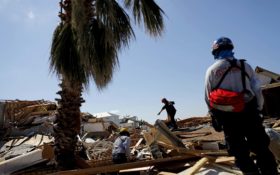 A Florida family’s call for help after Hurricane Michael left devastation across the state’s Panhandle region was answered on Saturday thanks to their niece’s keen eye when scanning satellite data.

Amber Gee was scanning the National Oceanic and Atmospheric Administration’s interactive aerial map to check on her grandmother’s property — and something stuck out in particular.

Gee had thought her grandmother and two other relatives had evacuated for the storm, but when she took a closer look at the satellite image, she saw the word “HELP” spelled out in the grass.

“I was checking on damages in the area on houses that belong to my family and I came across my grandma’s house,” Gee told ABC News. “And they had the word H-E-L-P written out in the yard.” 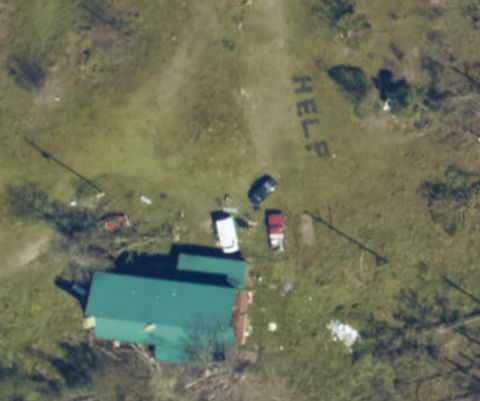 Gee had thought her family had evacuated the Category 4 storm prior to it making landfall in Mexico Beach, but her uncle, his wife, and a friend of theirs had ended up staying at the house and became trapped due to “a lot of downed trees” near the home.

“Luckily enough, my uncle who was staying there and was thinking outside of the box wrote the word H-E-L-P out,” she told ABC News.

Gee sent the photo to the Bay County Emergency Management, who sent deputies to the home and rescued the group.

The death toll from Michael’s destructive march from Florida to Virginia stood at 18 on Monday, with eight being in Florida, three in North Carolina, one in Georgia, and six in Virginia.

On Monday, Twitter user Blaine Rincon shared a photo of the damage caused by the destruction hurricane. He wrote,”In case you don’t have a scope on how hard some places were hit by Hurricane Michael, heres a before and after pic for you.”

In case you don't have a scope on how hard some places were hit by Hurricane Michael, heres a before and after pic for you. #TWDFamily #TWD #HurricaneMichael #MexicoBeach pic.twitter.com/yPZlCkWBLG

Four days after the storm struck, a large swath of the Panhandle was suffering, from little beach towns to the larger Panama City to rural communities miles from where the hurricane came ashore. More than 190,000 homes and businesses in Florida were without electricity, along with about 120,000 in Georgia.

President Donald Trump plans to visit Florida and Georgia on Monday to see the damage.