Help coming for seniors in nursing homes? - The Horn News 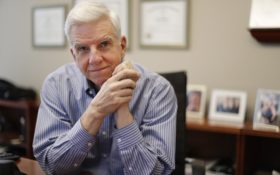 In a turnabout, the government said Wednesday it will start posting a list of some 400 troubled nursing homes , days after senators released the “secret” document along with a report questioning oversight of poor-quality facilities.

Dr. Kate Goodrich, chief medical officer with the Centers for Medicare and Medicaid Services, said the agency soon will post the list and update it regularly. She didn’t set a date.

“We are working actively to get the list posted,” Goodrich told reporters, saying that attention focused on the issue “has amplified a very important national dialogue on nursing home quality.”

The Associated Press reported Monday that Sens. Bob Casey, D-Pa., and Pat Toomey, R-Pa., had found that conditions at the 400 facilities were “indistinguishable” from those at about 80 poor-performing nursing homes that are publicly identified by the government and undergo an additional level of inspections.

In a statement, Casey welcomed the commitment to post the list, but said more work is needed to make sure the government’s program to improve poor-performing nursing homes is running properly and has enough financing.

About 1.3 million Americans live in nursing homes, with more than 15,700 such facilities nationwide. The troubled nursing homes that Casey and Toomey identified are part of the government’s Special Focus Facility program, representing about 3 percent of all homes.

Budget cuts appear to be contributing to the problem by reducing money available for focused inspections, according to documents and interviews.

Agency officials say they currently only have enough money for 88 slots in the special focus program. Those facilities are publicly identified. Consumers can spot them on the government’s Nursing Home Compare website by looking for an icon that resembles a traffic “caution” sign.

But a larger group of some 400 nursing homes are designated as “candidates” for the program, and their names have not been publicly disclosed. The agency says that’s now about to change.

It pushed back against the suggestion it was keeping secrets, saying its nursing home website uses starred ratings that allow consumers to readily identify troubled facilities. Nursing homes with five stars have much better than average quality and nursing homes with a single star are considered to be much below average. Nationwide, there are about 2,900 of the latter.

Goodrich said starred ratings are the best way for consumers to get a sense of quality, but the senators’ report concluded that the ratings can be misleading. For example, nearly 3 in 10 of the 400 “candidate” nursing homes with problems had two stars out of five overall.

The government spends about $400 million a year on all Medicare-related inspections, and Goodrich said most of that goes for nursing home checks. The Trump administration has asked Congress for nearly $45 million more.