"Heaven has a wall"; grocery store faces backlash for ad - The Horn News 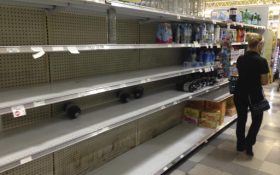 A grocery store chain is facing criticism after it sent out a weekly ad to stores in Arkansas and Louisiana that included the message: “Heaven has a wall.”

The Mac’s Cashsaver ad was distributed in the Arkansas cities of Camden, Magnolia and El Dorado, and in northern Louisiana.

The front page of the ad featured promotions for food products and included the text: “Heaven has a wall, a gate and a strict immigration policy. Hell has open borders. Let that sink in.”

The company describes itself as family-owned and Christian. Jack Digby is the manager of a Mac’s Cashsaver in Camden. He says he’s fielded dozens of angry calls over the ad.

The company tells Little Rock television station KARK that it stands by the ad and will continue to put out messages each week.