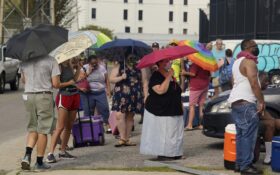 Dangerously high temperatures threatened much of the Northeast and Deep South on Thursday, as huge swaths of the country sweltered under a heat wave that could continue for days and send temperatures soaring in places like Boston, Little Rock and Virginia Beach.

As some temperatures neared 100 degrees Fahrenheit (37.8 degrees Celsius), millions of Americans sought comfort by staying in the shade of homes or in air-conditioned offices, and cooled themselves in fountains, at beaches or in cooling centers.

The heat was expected to extend into the weekend, prompting officials to urge people to seek shelter, as well as to drink lots of water and be good Samaritans by checking on elderly neighbors for signs of distress.

“It’s going to be very hot and humid. Hydrate and stay in shaded areas,” said James Tomasini, a meteorologist in Uptown, New York.

In the New York City area, temperatures will again soar into the 90s — below triple-digit records — but the high moisture in the air will make it feel well over a 100 degrees, he said.

Excessive heat warnings — issued when the heat index surpasses 105 degrees Fahrenheit (40.6 degrees Celsius) continuously for at least two hours — were in effect in parts of the Deep South and pockets of the mid-Atlantic.

Heat advisories extended along the East Coast, from South Carolina to southern Maine.

In the Tidewater area of southeast Virginia, temperatures were expected to reach nearly the century mark, but humidity will push the heat index beyond 105 degrees, said meteorologist Tim Gingrich.

“People could suffer heat exhaustion and heat stroke if they’re outdoors for a significant amount of time,” Gingrich said. “You don’t want to be outdoors in the hottest part of the day.”

Cooling centers sprung up across swaths of the country to provide relief from the stifling heat and high humidities. The Salvation Army opened up eight of its facilities in New York City to shelter people seeking escape from the heat.

This summer is shaping up to be one of the hottest on record — not just in the United States but across Europe and other parts of the globe.

In Arkansas, a combination of searing temperatures and moist air across much of the state prompted warnings about excessive heat — which could cause some people to succumb to heat stroke and other weather-related ailments.