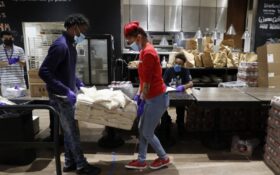 Chef Chad Houser opened his downtown Dallas restaurant five years ago to help give teens coming out of juvenile detention stability, and a push toward success.

When the coronavirus pandemic threatened that mission, he found a way to not only keep the teens working — and also give them a chance to help others.

“Our kids need us to begin with,” Houser said, “but they need us even more now.”

Within a week of Cafe Momentum closing to dining in March because of the pandemic, the teens who normally cycle through every job at the upscale restaurant — from cooking to dishwashing to busing tables to serving to hosting — had started building meal kits for needy families. Houser scrambled to raise funds so he could keep paying the teens and keep them engaged in the nonprofit’s program that offers everything from counseling to education.

De’Monica Dean, 19, said thinking about the families getting the boxes she packs with everything from cans of soup to fresh vegetables and fruits motivates her each morning.

“That’s my everyday wake-up. It’s like, do you want to get up today? OK, we know a family has to eat, so let’s get up,” Dean said.

Sais Daniel, the cafe’s curriculum coordinator, helps teach the teens skills ranging from restaurant work to life skills like how to create a resume. They’re also learning the joys of helping others.

“Sometimes they get lost in how small their world is, but being able to sit down and pack boxes, they’re like: ‘Man, I’m able to see someone else struggling and I’m a blessing to them. I’m able to help them,’” Daniel said.

Cafe Momentum has been delivering 1,550 meal kits a week to families in the area through various groups. Most of the kits, which include four meals for a family of four, are being distributed in the Richardson Independent School District.

Tabitha Branum, the district’s deputy superintendent, said the partnership with Cafe Momentum is “game changing” for their community, noting that over half of the district’s students qualify for free and reduced lunches.

She said that with school closed, the district is able to provide breakfasts and lunches during the week though a state program, but Cafe Momentum lets them also cover weekends.

As Texas reopens, Gov. Greg Abbott is allowing restaurants to welcome a limited number of diners inside after being restricted to takeout orders. But for now, Cafe Momentum — a restaurant that served entrees like sweet tea-brined pork chops and coffee-rubbed steak in its sleek dining area — will stick with providing meal kits.

Houser said he has raised enough money to keep making the kits through June. He’s not sure of the next move, but he said that when it’s safe and financially viable, the restaurant and catering business will resume.

The teens are ready to get back to preparing meals and serving guests. “They miss all the pats on the back and hugs that they get from guests,” he said.

In the meantime, 18-year-old Anthony Aleman said preparing kits feels good, as does knowing he still has a steady paycheck from Cafe Momentum.

“They got my back,” Aleman said.