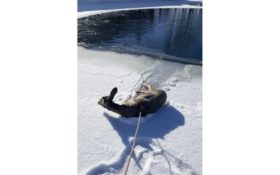 Two Wyoming sheriff’s deputies channeled their inner cowboy and lassoed a deer flailing in a frigid pond after it fell through thin ice, authorities said Wednesday.

Sublette County sheriff’s Deputies Justin Hays and Joshua Peterson responded to a report Tuesday afternoon that a deer had fallen into a pond near the small ranching town of Daniel in southwestern Wyoming.

Because the ice was too thin to walk on, they lassoed the deer and and pulled it to shore. They left the deer on a nearby driveway where it could warm up, and it was gone a few hours later, sheriff’s officials said.

Peterson stood at one end of the pond with a lasso and drove the deer toward Hays at the other end, Sgt. Travis Bingham said.

Peterson’s body camera captured video of Hays as he swung the lasso around his head before looping it easily around the deer.

The deputies carry ropes with them to herd cows that block roadways in the county, Bingham said. Hays, in particular, is a skilled cowboy, he said.

You can view a heartwarming video of deer’s rescue below: