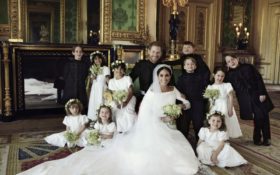 A Kentucky couple has officially adopted a group of five sisters who they have been fostering since 2016.

Aubrey, 11, and her four sisters, ranging in age from 4 to 10, were officially adopted by Whitney and James Meserve on Tuesday, WFIE-TV reported. Aubrey told the station that it’s a relief to end up exactly where they wanted.

The Meserves adopted another pair of siblings in February, meaning they now have one child in pre-school, four in elementary and two in middle school.

“You just adjust to it,” Whitney said. “I mean people are like ‘seven kids? Are y’all crazy?’ It’s just our way of life.”

She said they haven’t ruled out fostering or adopting again in the future.

It’s unclear what the Hancock County family has planned for the winter holidays, but Aubrey said she already got what she wanted this year. She said her holiday wish was that her family wouldn’t be split up and that they could grow up together.