Heartwarming! Heroes try to pay for breakfast, but then... - The Horn News 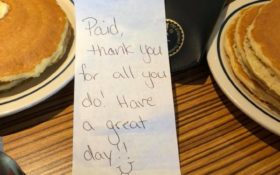 A group of EMTs from New Jersey received a heart warming gesture from a stranger on Friday morning when they had discovered their entire bill at IHOP had been paid for by a stranger.

The state of New Jersey has been fighting an overwhelming battle with fatal drug overdoses recently. One woman in recovery took an opportunity at the local breakfast spot to thank the rescuerers who save others on the brink of death.

The Tom’s River First Aid Squad shared a photo on Facebook last week with a signed receipt from the recovering addict thanking the group for all the do — and the EMTs were so moved that they were hoping to thank the anonymous woman for her generosity.

To the woman who paid our tab today at IHOP, thank you so much for paying for our breakfast. This gift was amazingly…

“Paid, thank you for all you do! Have a great day – Recovering Addict.”

Captain Alyssa Golembeski told NJ.com, “EMTs can eat, so we racked up like a $77 bill.”

“It was just a reminder that there is still so much good in the world. The note and paying for our breakfast… we are a boisterous bunch but that brought our table to complete silence,” Golembeski added. “We were practically in tears.”

Even after the post had recieved hundreds of likes and share, the generous woman still remains a mystery.

“When I asked the manager who it was, he told us she didn’t want to give her name and that she had already left. We never got the chance to thank her in person,” Golembeski said.

According to Golembeski, the group frequently recieves thanks and appreciation from their community, and to recieve a free meal was “astounding.”

“I really want her to know how grateful we all are to her and how much we hope she continues on her road to recovery.”