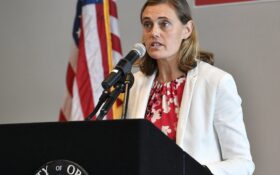 The health officer for Southern California’s Orange County has resigned after receiving threats over her order for residents to wear face coverings when near others in public to protect against the coronavirus.

Dr. Nichole Quick resigned unexpectedly Monday from a job where she worked 80-hour weeks and faced threats at a public meeting and on social media, said Frank Kim, the county’s executive officer. He said she had been provided security.

“It’s a very stressful position,” Kim told reporters. “There have been multiple staff that have received threats and each one of those is reviewed by law enforcement. We take them very seriously.”

A message left for Quick was not immediately returned.

Quick is the seventh senior health official to resign in California since the pandemic began, and health officials have been facing unprecedented pressure, criticism and threats, said Kat DeBurgh, executive director of the Health Officers Association of California.

In addition to the California public health officials who have resigned, one was given a sheriff’s escort to provide security, DeBurgh said.

“We certainly have had angry comments at meetings before, especially around vaccines, but this level of threat, of having to have a sheriff’s escort, we haven’t seen it before,” DeBurgh said.

At a recent Board of Supervisors meeting, a resident said she would invite others to hold workout sessions outside Quick’s home while wearing masks in protest until they dropped. DeBurgh said residents also took a banner depicting Quick as a Nazi to a public meeting and held protests outside her home.

The threats against Quick had been denounced by Michelle Steel, chair of the Board of Supervisors. On Tuesday, the Orange County Medical Association said Quick’s resignation was concerning.

“We are appalled at the personal threats and willful ignorance by some members of our community that ultimately led to her resignation,” the group said in a statement. “We must continue to protect public health based on science, and not allow bullying to drive the health recommendations that can keep us safe and healthy.”

Each county has a health officer who is a doctor appointed by the board of supervisors who can issue isolation and quarantine orders. Counties also have health agencies, which may have a separate director.

Quick issued her order in late May to try to limit the spread of the virus as the county began reopening more businesses. A similar order is in place in neighboring Los Angeles County.

Days later, Orange County’s sheriff said he wouldn’t enforce the order. In recent weeks, scores of residents have attended county board meetings to demand officials lift it, while others have bombarded officials with emails to defend it.

On Tuesday, Dr. Clayton Chau, the director of the county’s health care agency who was tapped as Quick’s interim replacement, said he didn’t foresee changing the order as the community readies to open day camps, hotels, movie theaters and other venues starting on Friday.

“Opening more sectors to go back into the community, including schools, we have to watch and see how we do when we enter that ecosystem before we make any decisions to downgrade the masks,” he said.

He added that face coverings are only required if you’re within six feet (1.8 meters) of others not from your household and exclusions apply for health reasons.

Orange County has reported 7,600 cases of the virus and 185 deaths. The county of 3.2 million people will now be looking for a new health officer, which Kim conceded will be tough to find as business owners and residents grow weary of measures aimed at the pandemic.