{Health Alert} U.S. measles on the rise in THIS age group - The Horn News 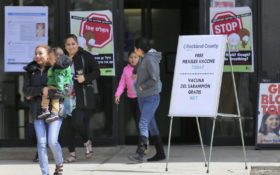 U.S. measles cases are continuing to jump, and most of the reported illnesses are in children.

Health officials say 465 measles cases have been reported this year, as of last week. That’s up from 387 the week before.

The Centers for Disease Control and Prevention updated the numbers Monday. Roughly 80% of the cases are age 19 or younger.