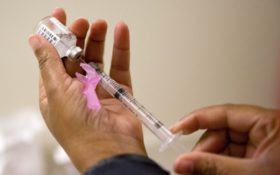 It’s flu shot season, but the pinch of a shot doesn’t have to also hurt your wallet.

Health officials recommend that nearly all Americans get flu vaccinations to blunt the impact of a disease that annually infects millions.

Roughly 145 million Americans get flu shots each year, according to the Centers for Disease Control and Prevention. That count represents about 60 percent of children and 40 percent of adults.

Here’s what you need to know about getting vaccinated:

WHERE, AND HOW MUCH

The good news is many people don’t have to pay anything. The Affordable Care Act required insurers to cover the cost of patients’ flu shots without charging a copay, although some insurers only cover vaccines given by doctors or at certain locations.

A government program also pays for shots for low-income children.

Traditionally, most people have gotten flu vaccinations at doctors’ offices or government health centers. But pharmacies and workplaces have become major venues for vaccinations, especially for adults.

CDC officials say they don’t know how exactly many people pay for shots themselves.

For those paying cash, pharmacies generally charge $20 to $45 per shot, but the price can vary based on which drugstore you visit. Also, the cost can rise to $70 or more if you get the higher-dose version of vaccine offered to seniors.

Some pharmacies offer discounts and other enticements. For example, CVS is offering customers at some of its pharmacies a $5 coupon redeemable at Target stores.

Websites such as https://vaccinefinder.org can help locate where doses are available in your neighborhood.

According to the CDC, flu costs the nation about $7 billion a year in sick days and lost productivity among working-age adults. That’s not to mention the heavy toll of hospitalizations and deaths that occur mainly among people 65 and older.

The vaccine is considered the best available tool in fighting flu, but it’s not perfect.

Flu viruses are rapidly changing, and it’s tough to make a highly effective vaccine against it. That’s especially true when it comes to protecting the elderly. During last winter’s flu season, vaccines barely worked at all in keeping seniors out of the hospital, with roughly 24 percent effectiveness.

Still, even a disappointing vaccine lessens the severity of illness and saves many lives, officials say.

One company offers a nasal spray version of flu vaccine, but health experts recently have been debating whether it’s as good as shots.

WHEN TO GET VACCINATED

The CDC urges people to get their flu shots by the end of October.

Health officials want people to be vaccinated before flu season hits, and in several recent years the illness has ramped up in some parts of the country as early as November. Also, children who are being vaccinated for the first time are supposed to get two doses about four weeks apart, so it’s important to get that going soon.

But some doctors think the vaccine has been disappointing in some seasons because its protection can fade quickly against certain flu viruses, apparently most dramatically in people 65 and older. The observation hasn’t been extensively researched, but it’s possible that senior citizens who are vaccinated in September may not be well protected in February.

Concerns about fading effectiveness are “definitely something to consider, but it’s not something at this point that we really know how to balance out with other issues,” said Dr. Lisa Grohskopf, a medical officer in the CDC’s Influenza Division.

Because CDC wants people protected if flu breaks out early, “October as a rule of thumb is not unreasonable,” she said.