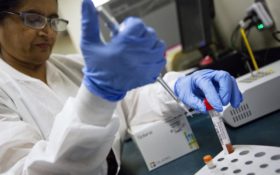 his nasty flu season, which has been worsening for months, may finally be leveling off.

Health officials on Friday said about 1 of every 13 visits to the doctor last week was for fever, cough and other symptoms of the flu. That’s no reason for health officials to celebrate yet: That level is among the highest in a decade. But it’s no worse than last week, and flu activity had been increasing each week since November.

“I thought I was going to die, I really did,” said Ben Bland, a 39-year-old event planner in Kansas City, Missouri, who was hospitalized this week with pneumonia on top of flu. “My lungs felt like they were going to blow out of my esophagus every time I coughed. My body ached head to toe.”

This season started early and has been driven by a formidable type of flu that tends to put more people in the hospital and cause more deaths. Making a bad year worse, this year’s flu vaccine is estimated to be only 25 percent effective against that type.

Preliminary data released last week indicated patient traffic in doctor’s offices and emergency rooms this flu season was as bad as the height of the swine flu pandemic in 2009. However, the CDC readjusted its numbers down slightly in Friday’s report, meaning this season did not quite match the intensity of flu activity seen in October 2009.

Still, it counts as one of the most intense flu seasons in more than a decade. Whether it’s peaking or not, flu season is still expected to last several more weeks.

“We are not out of the woods yet. We are not seeing any increase, and that is encouraging. But there still is a lot of flu happening out there,” said Dr. Daniel Jernigan, the CDC’s influenza chief. He said people should stay home from work or school if they get sick to prevent spreading flu, and people should still get vaccinated if they haven’t already. Even though the vaccine is not as powerful as officials hoped, it can lessen the illness’s severity, keep people out of the hospital, and save lives.

Flu remained widespread in every state except Oregon and Hawaii, the same as the week before.

The new report shows that for the week ending Jan. 27, just under 10 percent of U.S. death certificates listed flu or pneumonia. That’s down slightly from the week before, but indicates that flu remains at epidemic levels. There are as many as 56,000 deaths connected to the flu during a bad year.

Eighty-four children have died so far. Childhood deaths have reached about 170 in a season.

Figures released Thursday suggest this year’s flu vaccine has worked fairly well in children younger than 9. That was no comfort to parents with sick children.

“It’s horrible to see your child with a breathing mask on her face,” said Stephanie Calvin, 35, of Mandeville, Louisiana, whose 4-year-old daughter has been sick with flu for four weeks.

Calvin has taken four days of unpaid time off work to care for her daughter, alternating with her husband. “I’m a mom before I’m an employee. It was a no-brainer to stay home with her.”