[Health alert] Airport travelers may have been exposed to rare, deadly disease - The Horn News 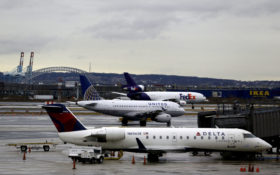 New Jersey health officials are warning travelers at Newark Liberty International Airport that they may have been exposed to the measles virus.

The state Department of Health says a young child carrying the disease arrived in the airport Monday from Brussels and later departed for Memphis. Health officials warn people could develop symptoms as late as April 2.

New Jersey residents who may have been exposed on the child’s flight will be contacted by their local health departments. Officials recommend contacting a health care provider if one develops possible symptoms.

Measles is a highly contagious disease with symptoms that include rash, high fever, cough, runny nose and red, watery eyes.

The warning comes just a few months after another measles warning at Newark’s airport.