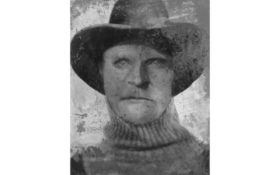 The headless torso that was found in a remote Idaho cave 40 years ago has finally been identified as belonging to an outlaw who killed his wife with an ax and was last seen after escaping from jail in 1916.

Clark County Sheriff Bart May said Tuesday that the cold case will remain open because investigators don’t yet know who killed Joseph Henry Loveless. Still, they were able to notify one of Loveless’ surviving relatives, an 87-year-old grandson, of his fate.

For investigators, the mystery began when a family hunting for arrowheads in Buffalo Cave near Dubois, Idaho, on Aug. 26, 1979, found his remains wrapped in burlap and buried in a shallow grave. Few additional clues turned up until March 30, 1991, when a girl exploring the same cave system found a mummified hand. Investigators began excavating, finding an arm and two legs nearby, also wrapped in burlap.

Local authorities turned to Idaho State University for help, and over the subsequent years anthropology students and staffers from ISU worked on the case. Experts from the Smithsonian Institution and the FBI were recruited to assist. No other remains were ever found, however, and without the head, identifying the John Doe of Buffalo Cave seemed unlikely.

The scientists were able to determine the slain man’s hair was reddish brown, that he was of European descent, that he may have been around 40 years old when he died, and that his body had been there for at least six months and possibly as long as 10 or more years. They weren’t able to tell what killed the man, though they could determine that his body was dismembered by a variety of sharp tools, perhaps to make it easier for his killer to hide the remains.

Earlier this year ISU and Clark County authorities asked the DNA Doe Project for help. The non-profit organization uses DNA data to identify John and Jane Does in hopes of returning their remains to their families.

Experts from Othram, a technology company focused on forensic DNA sequencing, analyzed a sample taken from the remains. Then Lee Bingham Redgrave, a forensic genealogist with DNA Doe Project, worked with her colleagues to build a “genealogical tree.”

It was huge. The Buffalo Cave John Doe was descended from pioneers who came to Utah with the Church of Jesus Christ of Latter-Day Saints, and his likely grandfather was a polygamist with four wives. That meant Doe’s cousins and other relatives numbered in the hundreds, said Bingham Redgrave.

Investigators also weren’t sure what time period the remains came from, further broadening the field of possibilities.

“He ended up having a lot of matches that were first cousins three times removed, which is very unusual in this type of scenario,” Bingham Redgrave said. “One by one we eliminated certain candidates and kept coming back to him.”

They used news articles, gravestone information and other records to try to find proof of life for all of the DNA candidates, she said. They noticed a few things about Joseph Henry Loveless’s life didn’t seem to add up. His gravestone was actually a cenotaph, a stone with his name on it but no body buried underneath.

Loveless’s second wife, Agnes Octavia Caldwell Loveless, had been murdered on May 5, 1916, by a man named Walt Cairns, according to news articles and a wanted poster created by local law enforcement at the time.

But according to another local news article on Agnes’ funeral, one of her children said that it was his father in jail for the murder, not Walt Cairns. The child also remarked that his dad would be escaping soon because he never stayed in jail long.

The DNA Doe Project team eventually unraveled the truth: Joseph Henry Loveless was born Dec. 3, 1870, in the Utah Territory to Mormon pioneers. He married twice — his first wife Harriett Jane Savage divorced him for “abandonment,” according to Salt Lake City court records — and became a bootlegger, counterfeiter and general outlaw in Idaho.

Loveless used a variety of aliases during his criminal career, including Walt Cairns, Charles Smith and other variations of his given and phony names. He was also notorious for escaping custody, Bingham Redgrave said, sawing through jail bars with a blade he kept in his shoe and once managing to stop a moving train that he was being transported on to flee law enforcement.

Investigators believe he died shortly after he escaped from the St. Anthony jail on May 18, 1916, where he was being held for Agnes’ murder.

“It’s blown everyone’s minds,” Bingham Redgrave said of the investigation. “The really cool thing, though, is that his wanted poster from his last escape is described as wearing the same clothing that he was found in, so that leads us to put his death date at likely 1916.”

Loveless’ descendants were unaware of their ancestor’s sordid past, so at this point there’s not much more to go on besides speculation when it comes to the identity of Loveless’ murderer.

Still, with the Clark County Sheriff’s Office keeping the case open as a homicide investigation, more clues may turn up yet.

“Who knows? Someone might recognize that name and say, ‘Oh, let me look at the old family photos.’ Someone may find something, an old news story, that isn’t digitized,” Bingham Redgrave said. “I’m really excited to see what else comes out.”