Hawaii residents near volcano: Get out or get arrested - The Horn News 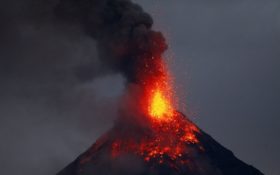 Hawaii’s Kilauea volcano has been dubbed the hottest and fastest-moving eruption ever as it spreads across new parts of the Big Island, forcing officials to order evacuations in two coastal neighborhoods over fears that the rapidly advancing flows could cut off dwindling escape routes.

Overnight, the lava was moving fast enough to cover about six football fields an hour, according to U.S. Geological Survey scientist Wendy Stovall.

On Thursday, Hawaii County ordered residents of the hard-hit Leilani Estates to evacuate by Friday morning, or face arrest.

Eruption update for May 31 at 1200. Due to the active volcanic eruptions, Mayor Kim has issued a mandatory evacuation order for Leilani Estates. https://t.co/SM6Spiae0e

Reuters reported that Kim declared a 17-block swath of the estates “off limits indefinitely,” and gave residents 24 hours to evacuate.

The lava that is currently coming to the surface is the hottest and most fluid to date.

“This is the hottest lava that we’ve seen in this eruption, even just a matter of 50 degrees centigrade makes a big difference in how quickly lava flows can move and how they behave once the magma exits the vent,” Stovall said.

In fact, the current lava eruptions in are as hot as Hawaii’s lava will ever get. “It can’t get hotter than where we are,” Stovall added. “We are pretty much tapping mantle temperatures right now.”

One fissure was observed early Wednesday morning spouting lava over 200 feet (61 meters) into the air.

Hawaii County officials stated that those remaining beyond the evacuation deadline “do so at their own risk, with the knowledge that emergency responders may not respond.”

“You are at risk of being isolated due to possible lava inundation,” the Hawaii County Civil Defense agency advised the public.

The county agency also made residents aware that if those choose to stay and need rescue operations, they will be liable for any costs.

This is a Civil Defense Message for Thursday, May 31 at 6:45 in the evening.Hawaiian Volcano Observatory reports that…

Posted by Hawaii County Civil Defense Agency on Thursday, May 31, 2018

The evacuation order “gives the county greater enforcement authority” and will relieve first responders rather than placing them at risk as well.

“There are no plans to go into the restricted area after 12:06 p.m. Friday and search for anyone who might still be there,” said a spokesman for the Federal Emergency Management Agency (FEMA). “But anyone found in the area after that time could be subject to arrest.”

“Refusing to evacuate may put you, your family and first responders in danger,” the county agency added. “Heed warnings from Civil Defense officials and stay alert.”

Strands of volcanic glass called as Pele’s hair was accumulating on the ground in Leilani Estates and surrounding neighborhoods, and winds may blow lighter particles farther away, scientists said. The strands can cause irritation and respiratory problems when it comes in contact with people.

The volcano eruption has been on going for four week and has destroyed 80 homes. “There’s no sign we’re getting that anything is going to slow down at the moment,” Stovall told reporters. “We don’t see any changes occurring.”