Hate groups rising in the Pacific Northwest? - The Horn News 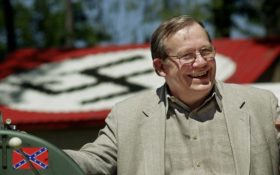 Nearly two decades after the Aryan Nations’ Idaho compound was demolished, far-right extremists are maintaining a presence in the Pacific Northwest.

White nationalism has been on the rise across the U.S., but it has particular resonance along the Idaho-Washington border, where the Aryans espoused hate and violence for years.

The neo-Nazi group was based near Hayden Lake, Idaho, starting in the 1970s, and eventually was bankrupted in a lawsuit brought by local activists and the Southern Poverty Law Center. Its compound was seized, and supporters dispersed.

But a series of incidents in recent weeks show far-right sentiments never really left the region.

In 2018, at least nine hate groups operated in the region of Spokane and northern Idaho, including Identity Evropa.

Keegan Hankes, a researcher for the Southern Poverty Law Center, said the number of hate groups is growing across the U.S., driven in part by a toxic political culture. The human rights group counted 784 active hate groups in the U.S. in 2014 and 1,020 in 2018.

In particular, white supremacist groups are growing because of fears that the country’s racial makeup is changing. “That drives a ton of anxiety,” Hankes said.

These new far-right activists are more scattered than the ones who used to gather at the Aryan Nations by the dozens, experts say.

“It is no longer necessary to go to a compound in Hayden Lake, Idaho,” said Kristine Hoover, director of the Gonzaga Institute for Hate Studies in Spokane.

With the proliferation of social media, groups “form in dispersed locations” and gatherings are “more covert,” she said.