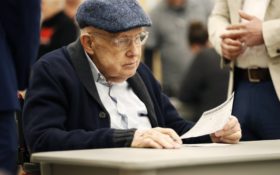 Although former Sen. Harry Reid is retired from Congress, he’s not finished working.

According to a New York Times report, Reid is getting involved in the search for U.F.O.s — amid a newly released Senate committee detail outlining plans for the Unidentified Aerial Phenomenon Task Force.

The goal of the task force is to collect information on unidentified foreign “aerial vehicles” and report back with findings 180 days after the authorization of the intelligence authorization act.

The NYT report comes on the heels of an increase in U.F.O. sightings by 50 percent during the coronavirus outbreak.

Reid hopes the task force can shed light on lifeforms from intergalactic worlds, and making a prediction about what government officials may find.

What he said is raising eyebrows.

In an earlier version of the Times article, Reid — speaking on extraterrestrial findings — said crashes of unknown objects have occurred and that researchers have been studying the materials in secret for years.

But the Times updated the story and erased that statement.

They fixed the statement attributed to Reid in a “correction” note at the bottom of the article.

Instead, Reid apparently said that “crashes of objects of unknown origin may have occurred and that retrieved materials should be studied.”

The official correction statement is below:

An earlier version of this article inaccurately rendered remarks attributed to Harry Reid, the retired Senate majority leader from Nevada. Mr. Reid said he believed that crashes of objects of unknown origin may have occurred and that retrieved materials should be studied; he did not say that crashes had occurred and that retrieved materials had been studied secretly for decades.

Whether or not NYT made a genuine mistake… or that Reid knows more than he’s letting on… is uncertain.

But he’s well-known in political circles for his interest in activity beyond the galaxy, and has long been an advocate for funding a U.F.O. program. He’s urging the information be delivered to the public as soon as possible.

“It is extremely important that information about the discovery of physical materials or retrieved craft come out,” he said.