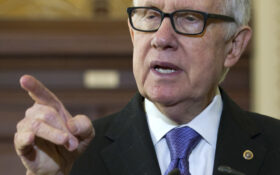 20 Democrats are taking the stage for a good old fashioned debate Wednesday and Thursday.

Many faces are fresh to the national spotlight — most Americans won’t recognize more than half of the candidates.

But one longtime lawmaker will be watching very closely. While he doesn’t claim to know what exactly will happen, he said there are some secrets and fireworks planned by his fellow Democrats.

“I don’t know what’s gonna happen in these debates,” Reid told KSNV 3 — but expect the unexpected. “You got ten people each night debating. I don’t know how you prepare for that. And I think what we’re gonna find with these debates is things we never expect.”

Reid, a longtime friend of Joe Biden, is expecting the other candidates to attack the former vice president. The worst kept liberal secret is that progressives within the Democratic party are keen on kicking establishment Democrats to the curb.

But the former Nevada lawmaker think that strategy will backfire.

“So I think you’re gonna see some pile-ons here and it may not work to the advantage of the people trying to pile on. It may be kind of the overkill, so we’ll see.”

When asked whether or not the Democrats should spend all their time on President Donald Trump — something they can’t seem to help doing — Reid offered his thoughts.

“I don’t think you can have a presidential debate without mentioning the incumbent President,” he said. But Reid warned the candidates that they shouldn’t get carried away with the president.

The debate, after all, is about what they would do instead of Trump.

“We can’t take for granted that this man who has lied 11,000 times is going to lose the election. I think that people should be prepared, so yes, they have to spend some time on Trump but they can’t spend all their time on Trump. They have to talk about what they’re going to do.”

Can Democrats prove to voters that they’ve gotten over their Trump Derangement Syndrome and present their own ideas?

Or is it more of the same?

Inevitably, Trump’s name is guaranteed to fly around the debate stage  even though he’s not even involved.

And Reid will have no choice but to watch from the sidelines.