It's happening! Obama rules being dismantled - The Horn News 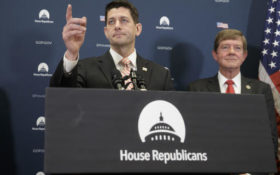 They’re looking to reverse years of what they see as excessive government regulation during the Democrat’s presidency.

House Republicans are expected to vote Wednesday to scuttle a regulation that prevents debris from coal mining from being dumped into nearby streams.

Lawmakers also are set to rescind a rule requiring disclosure of payments made to foreign governments relating to mining and drilling.

Rules on fracking, guns and federal contracting also are in the cross-hairs as Congress uses the little-known Congressional Review Act to void rules finalized during Obama’s last months in office. Recent regulations can be negated on a simple majority vote of both chambers and the president’s signature.