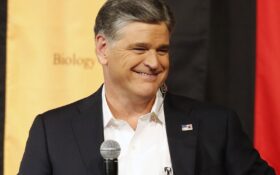 Fox News’ Sean Hannity revealed his four-step plan to reform the police in America, and restore faith in our country amid the ongoing turmoil.

Countering the Democratic Party’s calls to defund the police, Hannity broke down a multifaceted approach toward mending and maintaining trust between cops and American citizens.

“Clear action does need to be taken,” Hannity said. “What happened to George Floyd can never happen to any other American again.”

Hannity offered some solutions of his own ahead of President Donald Trump’s signing of an executive order on police reform.

Here are the four ways he thinks the healing begins:

1. “Every police officer has got to have a body cam and dash cams.”

Hannity’s first step comes at a time when an increasing amount of police departments are actively considering mandated body cameras for all officers.

As recently as 2016, according to a Bureau of Justice Statistics survey, nearly half of all law enforcement across the nation had acquired body cameras.

Although researchers say the jury is still out on whether or not the cameras actually changes the behavior of police officers, body camera video evidence has proved useful in understanding what has transpired in police-involved shootings when questions linger.

2. Ban chokehold techniques — with an exception.

The Fox News host suggested that only all chokehold techniques in the police force should be banned … unless an officer’s life is at risk.

Then, and only then, it should be used.

“You’ve got to protect your life,” he added.

3. Restoration of “law and order.”

His third step relieved the police, and put some responsibility on the government. He charged Democratic governors with allowing and encouraging mass citywide rioting across the nation, as news outlets saw them steal and vandalize night after night.

“How much longer are we going to allow anarchists to take over cities [and] police stations [and] burn police stations and other buildings to the ground?” Hannity asked.

Hannity’s fourth and final point slightly coincides with his second measure. He’s suggesting that new techniques be implemented that are effective in restraining, but aren’t intended to kill. He called the reform “long overdue.”

But the Fox News host knows that there are still plenty of other necessary measures to restore the faith lost in the tragedy.

“Sadly, that these cops did what they did in the Floyd case was not only reprehensible,” he said. “Think of the damage that it has done and set back police-community relations decades.”