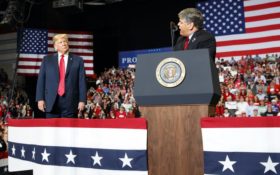 Hannity appeared on the podium in a Missouri arena after being called to the stage by Trump. Another Fox News host, Jeanine Pirro, also appeared onstage with the president.

“By the way, all those people in the back are fake news,” Hannity told the audience.

Hannity hugged the president when he came onstage and, after echoing Trump’s traditional epithets about the media, recited some economic statistics.

Monday’s rally appearance was not shown on Fox News Channel, but was aired on C-SPAN.

It came after Hannity’s prime-time show aired from the rally site. He played the role of cheerleader from the side as the crowd waited for Trump’s appearance. He pleaded with viewers to vote Republican on Tuesday to support Trump, and his opening monologue echoed a campaign slogan seen on signs at the arena: “Promises made, promises kept.”

He moved backstage, and with six minutes before the end of his show, Trump appeared for a billed interview that was largely bereft of questions. Trump told Hannity he had seen the beginning of his show.

“I never miss your opening monologue,” he said.

Hannity’s role at the rally had been put in question by Trump campaign itself. It announced on Sunday that Hannity was to be a guest, along with radio commentator Rush Limbaugh and singer Lee Greenwood. Fox said it did not know how that impression had been created and Michael Glassner, chief operating officer for the campaign, did not respond to a request for comment.