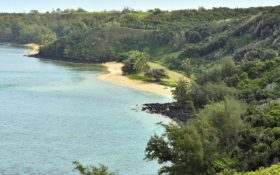 A Kauai man pleaded no contest after telling police he was under the influence of a hallucinogenic when he used a machete to wreak havoc on his former boss’ home because of a fish dispute.

Broyles told police he was on ayahuasca, a hallucinogenic brew from the Amazon, when he broke into his former boss’ home on Dec. 3 to get his share of fish they caught together, according to a detective’s report.

“He owes me choke ahi,” he told police.

Broyles’ ex-boss told police he was at home watching football with his wife when he heard a horn honking and then a loud bang. He then heard glass shattering from his front door and saw Broyles headed to the living area carrying a machete.

According to police, Broyles threatened his former boss and wife, “saying that he owed him fish and that he was going to kill him and chop him up.”

Broyles started hitting their television with his machete and then “broke out all the windows, the sliding door, broke the living room stand, chairs, the table, kitchen cabinets, the stove and microwave, canoe paddle among other things,” police said.

His defense attorney, Melinda Mendes, said Broyles accepted a plea deal with prosecutors because he wanted to take responsibility for what he did.

A judge is expected to sentence him to seven years in prison in August.