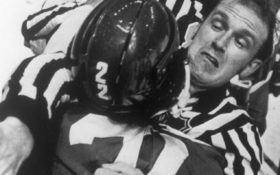 The Montreal Canadiens revealed the diagnosis Wednesday at the request of Lapointe and his family.

“Dr. Keith Richardson, the treating physician from the McGill University Health Centre, indicated that the cancer is located at the base of the tongue,” the team said in a statement. Lapointe will begin his treatments in the coming weeks. This form of cancer has a high cure rate.

Lapointe played most of his 16-year NHL career with his hometown Canadiens. He helped Montreal win six Stanley Cups before closing his career with stops in St. Louis and Boston. The defenseman also played for Canada in the 1972 Summit Series against the Soviet Union.