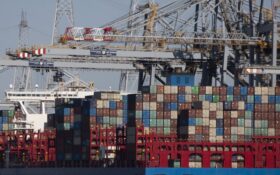 Meanwhile, Dutch police and prosecutors said in a statement that they arrested 30 suspects Tuesday throughout the country and searched 75 homes and offices.

According to the investigation, there are about 171,000 phones equipped with the Sky ECC service across the world.

Searches started at around 5 a.m. and mainly took place in the region of Antwerp. There were no major incidents, police said, adding that the operation dismantled several international organizations specialized in drug trafficking.

With thousands of shipping containers reaching Antwerp every day, the Belgian port city is one of Europe’s main entry ports for cocaine. Trafficking in the city has led to a surge of violence recently, with gun battles and grenade attacks taking place.

Last year, authorities in Belgium and three other countries dismantled a drug trafficking network that shipped hundreds of millions of dollars’ worth of cocaine into Western Europe. The investigation, which started when a container with 2.8 tons of cocaine was found in Antwerp, uncovered an international network with connections in at least four European countries and South America.

Dutch police and prosecutors seized 28 firearms in the port city of Rotterdam. Earlier in the investigation, they intercepted thousands of kilograms (pounds) of cocaine, heroin and hashish, prosecutors said.

The Sky ECC server was taken offline Tuesday and seized by Dutch authorities, according to the prosecution statement.

Prosecutors said while monitoring the encrypted messages they were able to prevent dozens of planned crimes, including kidnappings and murders.