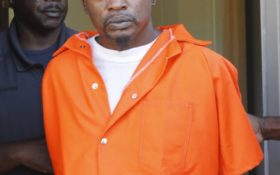 A Mississippi man pleaded guilty Thursday to killing two Roman Catholic nuns in 2016 in an agreement that averts the possibility of the death penalty, which was opposed by the women’s families and their religious orders.

Rodney Earl Sanders made the pleas to two counts of murder in state court in Lexington, blocks away from where Sisters Margaret Held and Paula Merrill had worked as nurse practitioners in a medical clinic.

Sanders stabbed to death Held and Merrill in the home they shared in nearby Durant. He also pleaded guilty Thursday to burglarizing the house and stealing Held’s car. Sanders was also indicted for raping both women, but did not admit guilt on those charges Thursday.

Shackled hand and foot in a loosely fitting orange jail jumpsuit, Sanders stood at times with his arms crossed before the judge. Lewis at times had to ask him to speak up.

Sanders was a resident of Kosciusko, but had been temporarily staying in a shed across the street from the sisters in Durant. Sanders told investigators he went through the back door of the sisters’ home, uninvited. Sanders said Merrill saw him first before a struggle took place with both women, an investigator testified in 2016. Court filings indicate DNA consistent with Sanders was found under the fingernails of at least one of the women. Prosecutors also say Sanders raped both women.

Mississippi Bureau of Investigation agent LeCarus Oliver testified in 2016 that Sanders confessed, telling officers that after stabbing the women, “he washed himself up because his hands were sticky.” Malone-Oliver said the state also had forensic evidence and eyewitness testimony linking Sanders to the crime.

The motive for the crime has never been clear.

“To this day, we continued to ask ourselves about Sister Paula and Sister Margaret’s last hours and minutes — how, and especially why,” Sister Susan Gatz, president of the Sisters of Charity of Nazareth, told the judge.

Both orders and the sisters’ relatives have opposed the death penalty for Sanders because it contradicts Catholic teaching.

“My family is morally and ethically opposed to the death penalty, as were Paula and Margaret,” said Rosemarie Merrill, Paula Merrill’s sister. Rosemarie Merrill told the judge she was “relieved” that Sanders would spend the rest of his life in prison, but also said she had prayed for him and his family every day since his arrest. She and other called for Sanders to repent and try to reform his life in prison.

Relatives of Held and Merrill, as well as other members of their religious orders, filled rows of benches in the courtroom Thursday. Some clenched their eyes shut as Malone-Oliver read the charges against Sanders before he pleaded guilty.

Marie Sanders, the wife of Rodney Sanders, was one of Sanders’ few friends in the courtroom.

Also among those who spoke to the court was Sister Mary Walz, one of three new Catholic sisters who have moved into Held and Merrill’s house to minister in Holmes County. Walz, a social worker and a member of the Daughters of Charity, said she never met Held or Merrill, but felt like she knew them from meeting their former patients.

“They knew the sisters cared for them and took a personal interest in their well-being,” Walz said. “I feel certain that their last breath, conscious or not, was a prayer of forgiveness for Rodney.”