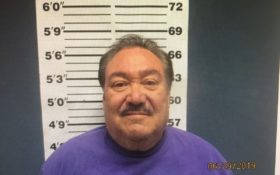 A prominent Democratic senator from New Mexico was convicted and jailed on drunken and reckless driving charges on Tuesday — and he’s heading to jail.

The trial delved into police body camera video of the watery-eyed lawmaker in apparently urine-stained shorts, struggling to count backward on a field sobriety test in the aftermath of a car wreck.

During testimony from police officers and medical personnel, prosecutors highlighted that state Sen. Richard Martinez of Ojo Caliente refused a breath test to determine his blood-alcohol level after his car slammed into the back of another vehicle at a stoplight in the community of Española.

Police body camera video was repeatedly reviewed in court that shows Martinez responding to officers with halting speech and failing a sobriety test that required he count backward from 31 to 14.

Martinez had pleaded not guilty to charges of aggravated drunken driving and reckless driving.

In opening statements, defense attorney David Foster highlighted that Martinez may have become dazed as his head struck his car windshield and predicted that evidence will not prove that he was intoxicated.

In the police body-camera video, a local fire official at the scene of the car wreck says, “I think that he did pop his head.” But an emergency room doctor who examined Martinez that night found no indications of head trauma.

Physician Valeria Merl ordered an X-ray scan of Martinez’s neck as a required precaution for patients who appear to have been drinking alcohol and may have dulled senses — and found no injury. She had smelled alcohol on Martinez’s breath but knew nothing more about his drinking that night.

Martinez originally told police he had one or two beers, and later corrected to say had three glasses of wine and no beer.

Foster pried into procedural requirements that may have been overlooked by Española police Officer Dustin Chavez as he applied an alternative for a field sobriety test to a suspect in an ambulance with a broken ankle who could not walk. He showed that Chavez diverged from some detailed requirements in reading an implied-consent warning to Martinez about the consequences of refusing a test of his blood-alcohol level.

Martinez, a former magistrate and current chairman of the Senate judiciary committee, sat silently through the trial in state district court.

A couple in the car hit by Martinez’s vehicle described an impact amid screeching tires that pushed their car into an intersection and the back and neck pain they have endured as a result of the wreck.

“It felt like my head was going to be detached from the base of my skull,” said Johnny Sisneros, the driver of the car that was rear-ended. Sisneros said he saw Martinez attempting to conceal his “tomato”-red face from recognition in the aftermath of the wreck.

Martinez is running for reelection in 2020, bucking calls for his resignation by Republican Party leaders. Prosecutors filed as trial evidence photographs of Martinez’s crumpled Mercedes SUV with a customized red “SEN 5” license plate — a reference to the senator’s legislative district.

Overruling objections by the defense on Monday, state District Court Judge Francis Mathew allowed prosecutors with the state attorney general’s office to play segments of police body camera video footage of Martinez speaking with police from the driver’s seat of his car in the immediate aftermath of the crash.

Later at a hospital, Martinez reacted to his arrest with disbelief and the words, “Jesus Christ, are you really doing this?”

During the trial, Special Assistant Attorney General Mark Probasco noted a dark stain on Martinez’s denim shorts and asked a police officer in court why it may be relevant.

“This is an indicator of someone who has been intoxicated, highly intoxicated, being unable to hold their urine,” officer Chavez told the court.

Martinez left the courtroom without comment and must return later for sentencing.

Special Assistant Attorney General Mark Probasco said the reckless driving charge carries a mandatory five-day jail sentence, plus at least 48 hours for aggravated driving while intoxicated. Prosecutors indicated they hope to also win restitution for the crash victims injuries in the sentencing phase of the trial.

Even Democrats are turning against Martinez. Gov. Michelle Lujan Grisham urged the liberal lawmaker to resign from the Senate.

“There is no way to square the circle,” the Democratic governor said in a statement. “Drunken driving is an intolerable scourge in our state, and our elected leaders must hold themselves to the highest possible standard of behavior.”

Top Senate Democrats recommended removing Martinez from his influential post as judiciary committee chairman when the Legislature convenes in January.

“The time has come for the New Mexico State Senate to take appropriate action,” Democratic Senate majority leader Peter Wirth and Senate president Mary Kay Papen said in a statement. “Whether or not Sen. Martinez continues to serve in the Senate will be left for Sen. Martinez and the voters in his district to decide.”

In 2018, Republican state Rep. Monica Youngblood was voted out of office after her conviction on aggravated drunken driving charges. She brought up her advocacy work for the police as a lawmaker in a widely circulated video of her arrest at a police checkpoint in Albuquerque.