Guess who wants to be Trump's Chief of Staff (CRAZY!) - The Horn News 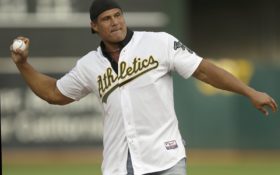 Jose Canseco is ready to take a swing at politics.

The former major league slugger has made his pitch for a big job at the White House, tweeting Wednesday to President Donald Trump: “u need a bash brother for Chief if (sic) Staff.”

Canseco told his “little buddy” he has “a secret reorg plan already.” He suggested Trump send him a direct message and signed off #yeswecanseco.

The outspoken Canseco knows his way around Washington. He testified on Capitol Hill before Congress during its 2005 hearings into the use of steroids in baseball.

Trump’s decision on a replacement for departing chief of staff John Kelly is expected by the end of the year.