Guess who spent Christmas having a Trump hissy fit? - The Horn News 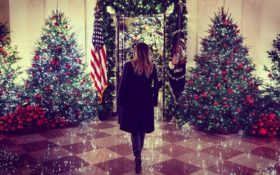 How did liberal leaders and news organizations spend the Christmas holidays?

Thanking God for His blessing on our nation, perhaps? No.

How about giving to the poor, or volunteering at a soup kitchen? Of course not.

Maybe encouraging others to give to Toys for Tots, to brighten a little one’s Christmas? Wrong again.

You would think that the birth of our Savior would be a time to set aside politics, especially vicious attacks, but the media are at it again.

This time, they spent the Yuletide calling the White House Christmas decorations a “Circle of Hell.”

As soon as First Lady Melania Trump tweeted her holiday decor the attacks began. (It’s not like liberals have anything more important to do than to demonize Christmas decorations.)

The Trump White House is decked out in red, with trees made from cranberries and gingerbread recreations of D.C. landmarks.

Featured among the decorations designed by the First Lady is a beautiful 18th century nativity scene.

The Washington Post called the decorations a “blood-red…nightmare,” and “holy Hell!”

Vox dubbed the Trump decorations as “horror-tinged” and wrote that they “immediately reminded gawkers” of horror movies. Vox’s Aja Romano commented that now “the White House itself has become a visual representation of what many people view as the real-life horror being carried out by the Trump administration.”

Vice broadcast that the trimming accurately represents the Trump presidency as a “circle of Hell (that) Dante could never have dreamed up.”

Perhaps the reason for the liberals’ cruel knee-jerk reaction is the theme of Melania Trump’s adornments: “American Treasures” celebrates the unique heritage of the United States.

One supportive observer exclaimed that the White House “shines with the spirit of patriotism.”

The Left’s petty attacks are nothing new. Last year, the media gripped that Trump’s joyous Christmas designs were “nightmarish,” “spooky,” “grim,” “barren,” like “the walls of the damned” or “a mental institution.”

Vogue wrote that the 2017 decorations were “a desolate manifestation of [Melania’s] own isolation.”

Benny Johnson of The Daily Caller had a completely different take on the White House decked out for Christmas. After seeing it for himself, he called them “magical.”

“Every room of the White House was open and glowing,” Johnson wrote. “The rooms were dripping in history and twinkling Christmas lights.”

The Daily Caller columnist said the mainstream media’s hateful reaction only confirmed the “bias of liberal reporters who cannot bring themselves to find a single shred of happiness or joy in anything that the Trump family does.”

With a wink, Johnson suggested that Grinch-like liberal reporters should go see the decorations for themselves and perhaps their “small heart” would grow “three sizes that day.”

Our First Lady brought back the Gold Star Family Tree, honoring U.S. troops and their families. Patriotic ribbon adorns the tree, and visitors are encouraged to write a message to their loved ones in military service.

“Our theme honors the heart and spirit of the American people,” Mrs. Trump explained. “Thank you to the many volunteers and staff who worked hard to decorate the halls of the People’s House in Christmas cheer.”

But perhaps the most beautiful adornment of all is the 300-year-old nativity scene, with 22 wooden figures around the crowned Christ child.