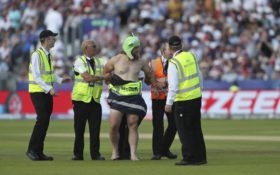 He danced on the wicket. He did cartwheels. He escaped the clutches of not one, not two, not three but four flailing members of security.

A streaker wearing nothing but a green hat ran onto the field during a high-stakes match at the Cricket World Cup between host England and New Zealand on Wednesday and provided around five minutes of entertainment that had a packed crowd roaring with laughter.

Stewards and security were extremely slow to react as the spectator halted play by jogging toward the middle of the field and dancing about in front of New Zealand batters Tom Latham and Mitchell Santner. He then set off on a gentle run, weaved around security staff as they attempted to stop him, before he was brought to the ground and a coat placed around his midriff.

With the crowd cheering inside the quaint Riverside Ground in Chester-le-Street, northern England, the streaker briefly broke free from four members of security who had a hold of him — their attempts to stop him resembled rugby players missing tackles — and ran back toward the middle.

He was stopped for a second time and led away. The sport’s governing body, the International Cricket Council, later said he had been arrested.

England fans had another reason to smile — their team won by 119 runs and advanced to the semifinals.