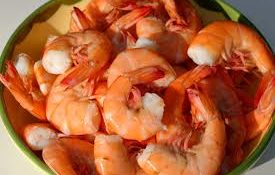 A thief stuffed a total of 30 bags of frozen shrimp down his pants in back-to-back burglaries of a Southern California grocery store, police said Wednesday.

The man took the shrimp from a Vons market in the city of Riverside by entering the store three times in a span of 15 minutes on Dec. 14.

Each time he went to the frozen food section and concealed the shrimp in his pants, Riverside police said in a statement.

The stolen food had a retail value of more than $500.

Security video of the suspect in the market was posted on the Police Department’s Facebook page.