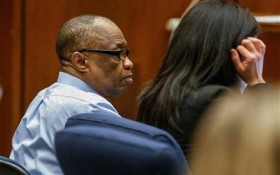 The trial of alleged “Grim Sleeper” Lonnie Franklin Jr. headed to a close Monday after months of testimony about a serial killer who stalked women during the 1980s crack cocaine epidemic, then laid low for 14 years before renewing the grisly sex attacks.

Closing arguments were scheduled to begin in the morning and could last two days.

Franklin, 63, could face the death penalty if convicted.

He is charged with nine women and a 15-year-old girl between 1985 and 2007. They were shot or strangled and their bodies dumped in alleys and trash bins in South Los Angeles and nearby areas.

He also is charged with the attempted murder of a woman who survived being shot in the chest and pushed out of a car in 1988.

At his trial in February, the women identified Franklin as her attacker and said he took a Polaroid photograph of her after the attack.

Prosecutors said a photo showing the wounded woman slouched over in a car was found in Franklin’s possession when he was arrested in 2010.

Prosecutors say many of the killings occurred in the midst of a crack cocaine epidemic in South Los Angeles and many of the victims were prostitutes.

At one point, prosecutor Beth Silverman told jurors that Franklin targeted women “willing to sell their bodies and their souls in order to gratify their dependency on this powerful drug.”

Prosecutors allege that firearms or DNA evidence connects Franklin to the killings. Before his arrest, a police officer posing as a busboy at a pizza parlor got DNA samples from dishes and utensils Franklin had been using at a birthday party.

Franklin’s lawyers, however, argued that many DNA samples taken from “Grim Sleeper” victims or their clothing didn’t match Franklin.

Defense attorney Seymour Amster told jurors last month that many victims had DNA from more than one man on their bodies and that more than 20 DNA tests excluded his client.

Both Silverman and Amster acknowledged disliking each other and at times held heated arguments in the courtroom out of the jury’s hearing.

In March, Amster yelled at Superior Court Judge Kathleen Kennedy after she ruled that he would have to refile a subpoena.

“I am now going to rest. We have no defense,” Seymour said to gasps in the courtroom. “I cannot represent this man any further.” However, he continued on with the case.

Authorities dubbed the killer the “Grim Sleeper” because of a gap between killings from 1988 to 2002.