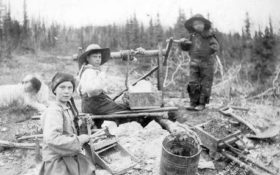 Greta Thunberg made the cover of Time magazine as its youngest-ever “Person of the Year,” but some of her followers believe she’s been in an even more shocking photograph — and she may not be quite as young as she looks.

A picture dug out of the dark recesses of a major university rocked the internet, because it showed what appeared to be a black-and-white picture of Greta… taken before she was ever born.

Someone marked the picture “Youths operating gold mines on Dominion. Klondyke, Y.T.,” but it has set tongues wagging from one end of the world to the other.

Somehow, someone pulled it out of the dusty stacks of crinkled pictures and yellowed papers inside the University of Washington’s library system, scanned it into a digital format, and slapped it on the internet.

The breathtaking photo shows a young girl who is the spitting image of the 16-year-old climate change activist.

The girl it depicts has Greta’s face ad her expressionless look. She’s wearing a set of braids just like Greta’s signature coif. She’s even wrapped her head in a rag, as the teenage demonstrator is sometimes known to do.

And just like Greta, the girl in the picture is left of center.

The only problem is the picture wasn’t taken at the United Nations or one of her Friday strikes for climate change.

And the photographer, Eric A. Hegg, died in 1948. He took the picture five decades earlier.

Hegg snapped a shot of the Greta lookalike during a trip to the frozen tundra in 1898, during the middle of the Alaska Gold Rush.

The picture shows three children operating a contraption known as a rocker at a gold mine near Dominion Creek, in Alaska’s Yukon Territory, according to a description by the digital collection at UW.

A Twitter account marked “Cool History” tweeted out the picture late last month, and the site’s followers’ retweets and shares made the stunning photo go viral.

The photo started out as fun—then some the whole twisted theory took on a life of its own.

Greta’s supporters began saying that she actually is a woman out of time, possibly sent back from the future!

“Time traveler or Greta in a past life?” tweeted a supporter named Melissa, whose Twitter username is cosmicconpod. “My mind is literally blown.”

It didn’t take long for the mysterious photo—and the ridiculous theory—to become frontpage news as far away as India and Australia.

And the stories grew to greater proportions than the ancient Greek myths.

One activist said Greta had “obviously traveled into the future and experienced the post-apocalyptic world in which we did not fight the climate crisis, and she’s returned to warn us all!”

A man named “Jack Strange” said that “actually she’s a time traveler, and she’s come to warn us about the future. It’s the only explanation.”

Thunberg’s followers see her as a teenage superhero, fighting evil corporations to save the planet.

She took off a year from school and sailed to the United States on a “zero-carbon emission” boat—but the boat was made of plastic and other products made from fossil fuels. And her pilots had to fly back and forth to Europe twice, canceling out her ride completely.

But she’s best known for dressing down the entire world, screaming at the UN, “How dare you!”

“You have stolen my dreams and my childhood with your empty words, and yet I’m one of the lucky ones,” she insisted, trying to pin the destruction of the planet on—everyone who disagreed with her. “People are suffering. People are dying. Entire ecosystems are collapsing. We are at the beginning of mass extinction, and all you can talk about is money and fairy tales of eternal economic growth.”

People who can believe that will believe anything.