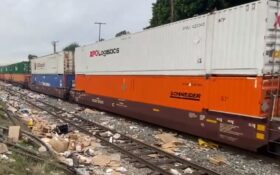 San Francisco made headlines last year for viral videos of mass looting. Now, a new video has emerged farther south — and this one may shock you.

The video depicts the results of recent train robberies in Los Angeles, and consumers are feeling the results almost 1,000 miles away.

Keep hearing of train burglaries in LA on the scanner so went to #LincolnHeights to see it all. And… there’s looted packages as far as the eye can see. Amazon packages, @UPS boxes, unused Covid tests, fishing lures, epi pens. Cargo containers left busted open on trains. @CBSLA pic.twitter.com/JvNF4UVy2K

The video first surfaced in a tweet by John Schreiber, a photojournalist at CBS Los Angeles.

Schreiber went to Lincoln Heights — a neighborhood of L.A. — to investigate reports of train burglary.

According to Schreiber’s videos, these trains often slow down while pulling into the railroad company’s intermodal facility, where the cargo will be transferred to trucks. Presumably, these packages leave Asia by ship, leave the Pacific ports by train, and leave L.A. by truck.

Schreiber suspects that the burglars break open the containers from the slower trains.

Schreiber also spoke to law enforcement officers, who offered their own theories.

Schreiber said of the bags, “They are often full of boxes with merchandise bound for residential addresses. More valuable than say, a cargo container full of low-value bulky items like toilet paper.”

In other words, the train robbers are stealing packages bound for family homes. Schreiber found an open package bound for Bainbridge Island, Washington — a Seattle suburb thousands of miles away.

Schreiber estimated that the robbers had broken into 20 or 25 percent of railroad cars. The railroad company, Union Pacific, serves consumers as far away as Chicago.

Schreiber tweeted, “Missing a package? Shipment delayed? Maybe your package is among the thousands we found discarded along the tracks.”

Missing a package? Shipment delayed? Maybe your package is among the thousands we found discarded along the tracks. This is but one area thieves have targeted trains. We were told this area was just cleaned up 30 days ago so what you see is all within the last month. @CBSLA pic.twitter.com/43002DPyZa

The burglars have struck during the global supply chain crisis, a contributor to inflation. The rail facility sits about 25 miles away from the Port of Los Angeles, a facility currently running 24/7 in order to try and clear the supply backlog.

Schreiber’s report comes with some limitations. For example, no videos of red-handed robbers have emerged yet.

However, one video showed someone being chased by Union Pacific’s security officers.

UPS appears to have hit back at Schreiber via Twitter, but the company deleted its tweet as of Friday morning.

This opened package from @REI destined for Bainbridge Island, WA was taken off a train. Typing in the @UPS tracking # and it obviously lists it as “delayed.” We found lots of opened packages bound for the Northwest along this section of tracks. pic.twitter.com/dO82QoJhTT

Unfortunately @UPS, it’s gonna take a lot more than a tracking number in this situation. https://t.co/KywL26jb45