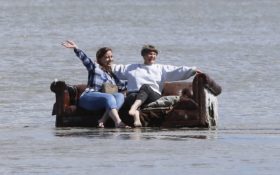 A gathering at the Great Salt Lake in hopes of making it into the record books fell way short.

Utah park officials invited people to a beach on the lake’s south end Saturday in an attempt to set the world record for the largest number of people floating together, unassisted, in a line at one time. The lake’s high salinity makes it easy to float on the water.

According to the Guinness World Records website , Argentina holds the current record after 1,941 people successfully floated together on the surface of Lago Epecuén de Carhué in 2017.

Utah State Parks manager Jim Wells said only about 300 people showed up for Saturday’s event but “everybody had fun (and) it ended up being a beautiful day.”